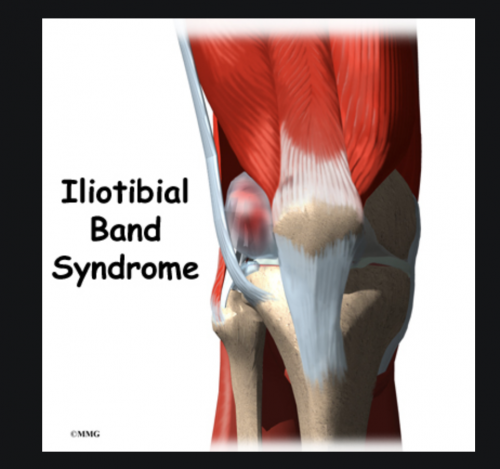 Iliotibial Band Syndrome (ITBS) is an injury pain commonly occurs on the outside of the knee. Previously this injury was believed to be caused by friction of the ITB on its attachment site at the knee, hence being call ‘ITB friction syndrome’. However, in recent years this injury has been found to be less due to friction, but more by compression of the tissue and the fat-pad lying beneath the ITB attachment point. Although most common in runners, ITB syndrome can also present in other active populations.

The ITB is a thin, but highly rigid, piece of tissue that runs from the tensor fasciae latae (TFL) muscle at the hip, through to its bony attachment on the outside of the knee. It provides support to the knee when in the single leg stance phase of both walking and running, this is the point from initial foot contact until the foot then leaves the ground. It works alongside the muscles of the hip to perform active movement and also helps prevent torsional and twisting forces within the knee joint.

Commonly referred to as ‘runner’s knee’, ITBS is estimated to account for up to 22% of all lower limb injuries in runners. Its gradual type onset means that lingering knee pain may be felt in the early stages of injury, before it advances to the point of needed to stop the exercise being performed. Pain may come without warning with prolonged pain when attempting to continue.

The gluteus medius and gluteus maximus are two import muscles for stability of the hip during single leg phase of running and walking. If these muscles are prone to fatigue or not engaging effectively, often the TFL muscle will activate to compensate for weakness in the glutes. This can then increase the load of the ITB as it connects to the muscle fibres from the TFL.

Hip strengthening should form part of the rehabilitation and further prevention of this injury. In the presence of ITBS aggravating loads should be reduced as to minimise any further injury and appropriate gym based exercise should also take place. As the difficulty of the exercises progress, more dynamic exercises will need to be done, and making these relevant to sport or activities you are wanting to return to.

Coaches, trainers and physiotherapists are well equipped with exercise prescription skills and knowledge. A detailed physical assessment may help identify the areas needed for improvement, and ensure the most suitable exercises are given to enhance recovery and provide future prevention of the injury.